Posted on July 12, 2021 in challenges, positivity, Playing, and negativity. 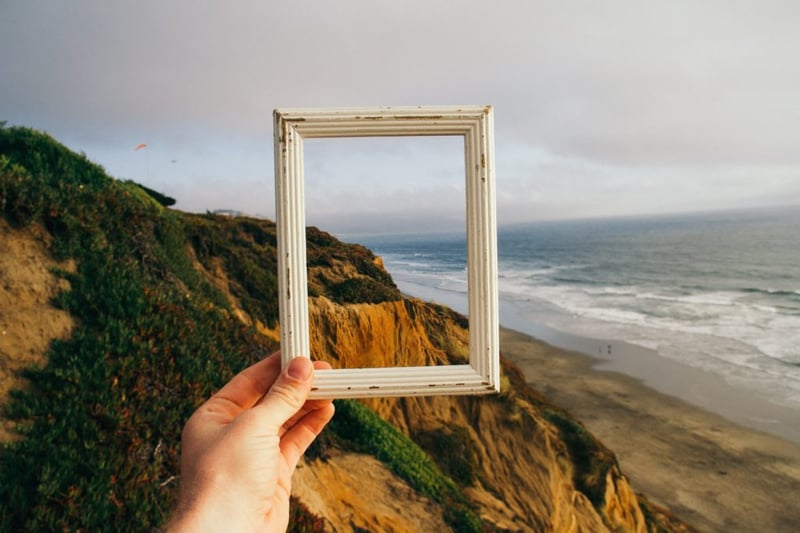 I've talked before about how I'm an overthinker. I wish I could report that I am always enjoying the present moment, but I'm for sure not. Worries, anxieties, and fears about the future have a tendency to get cozy in my brain, which is why I'm excited about my latest challenge: The Cognitive Reframing Challenge.

Cognitive reframing is a part of Cognitive Behavioral Therapy (CBT), which comes from psychologist Aaron Beck's work in the 1960s. He thought that if people could recognize their unhealthy, automatic thoughts, they could change them (or reframe) and by changing their distorted thoughts, people could improve their overall mental health.

Cognitive reframing is when someone recognizes their distorted thoughts and then changes them to better match reality.

The first step in reframing distorted thoughts is taking an inventory of which cognitive distortions we fall prey to in the first place.

I spoke with Margot Escott, LCSW about how she uses cognitive reframing in her therapy practice. She begins by giving her clients a list of cognitive distortions to see which ones resonate with them.

Here are some of the cognitive distortions (ways we distort reality):

Mental filtering is when you only see the negative, while missing out on the positive.

Jumping to conclusions is when you make assumptions without all the information.

It's not always about you. Personalization is when you blame yourself for everything.

Overgeneralizing is when you have information about one thing and assume it pertains to an entire category.

When you make broad statements about yourself or others based on individual behaviors, that's labeling. Like if you slip on the sidewalk and conclude that you are a hot mess.

Shoulding and musting happens when we think all people should live up to certain universal standards.

Emotional reasoning is when you think your feelings reflect everyone's reality.

That's a quick sneak peek at some cognitive distortions. Before we start the challenge, look over them and think about which ones seem familiar.

The first step of the cognitive reframing challenge is to keep track of how many times you fall into each cognitive distortion for a week.

Let's say you hear a news story about the economy and you're shook. You start obsessing about how you're going to lose your job and all your money and the bank will take your home and you'll die alone on the streets. I'd put a tally mark in the catastrophizing box because your brain took some news about the economy and then made a beeline to dying alone in the streets.

Keep tabs on your cognitive distortions like this for one whole week.

If it's a tie, choose the cognitive distortion that you think is most harmful in your life.

Make sure to tag @playyourwaysane on Instagram to tell me about your winning cognitive distortion.

Once you know which cognitive distortion is the so-called winner, it's time to get self-reflective. Think about whether the distortion is true or not and how often it's true.

The goal here is to figure out what the actual reality is.

Let's look at our economy example. It's not rational to think that a bad economy will inevitably lead to homelessness. It could, but there's a lot of gray area here.

Depending on your situation, it's more likely that the government will offer support or you'll have to dip into your savings or ask someone for help before you lose it all. This doesn't mean the worst won't happen. It's just not as likely as your catastrophizing makes it seem.

Same goes for your husband's eye rolling. He might be mad at you, but he might also be thinking about something else or not mad at all. You don't know because you didn't ask.

This step is about gaining some perspective instead of just letting your thoughts hold you hostage.

For the final step of the Cognitive Reframing Challenge, you'll need to reframe your winning cognitive distortion for one week.

Let's say your winning distortion was catastrophizing, and you now have more perspective on reality thanks to step 3. Now it's time to give yourself a mantra to say each time you catastrophize this week. Maybe something like, "You are lucky to still have supportive friends, a job, and some savings, so you're not going to live on the streets yet."

And for our eye rolling example, you might just want to remind yourself that you don't know until you ask. And then ask your husband each time you catch yourself reading his mind.

After your second week of the Cognitive Reframing Challenge, tell me how it's going on Instagam. Just tag me @playyourwaysane.

That said, I'm a big fan of therapy and can't recommend it enough. Learn more about cognitive behavioral therapy and your own distorted thinking by finding a trained professional to guide you through the process.

Try These Other Challenges

I write for Psychology Today, Lifehack, and right here, and once a month I send all my loyal subscribers an email with my most popular articles and a free everyday game that will help you live a more mindful, joyous, and connected life. You'll also receive three improv-inspired exercises immediately, just for subscribing below.