Posted on May 13, 2020 in listening, Working, and improvisation. 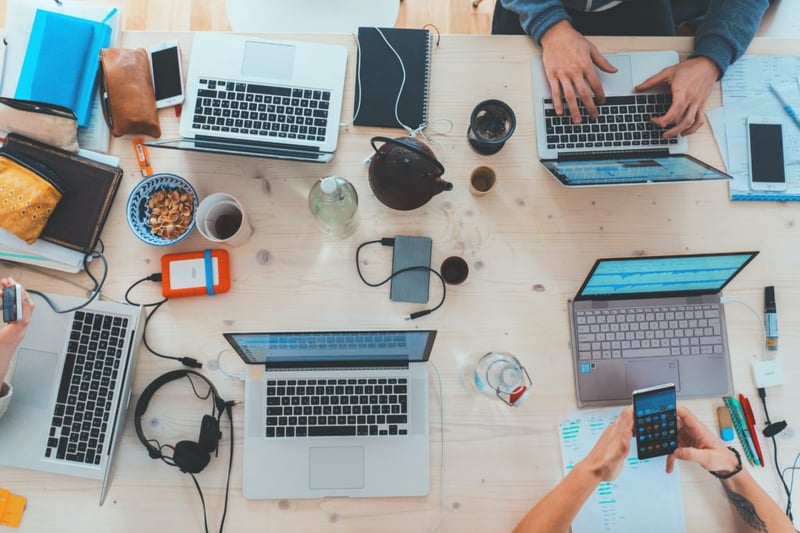 Are you feeling the Zoom-fatigue? We've been spending the last two months adjusting to the new normal, which is remote learning and virtual meetings. I'm an in-person kind of guy, so it's been strange for me to chat with people over the computer and toast friends during virtual happy hours. That's why I've created this list of quick team building ideas.

Improvisation has a lot to teach us about team building. Studies have shown that it helps people tolerate uncertainty, get creative, and lower anxiety. And because it's a performance art that people practice, it comes with tons of fun exercises that teams can try to help them listen to each other better and work more collaboratively and creatively.

This first set of activities will help your team connect and collaborate over Zoom or whatever online platform you're using to communicate these days.

Remote meetings can be challenging because of technical glitches like computers freezing, internet dropping, and that pesky delay. These quick team building ideas keep those challenges in mind to help your team listen to each other better and work more collaboratively and creatively.

If you can count to 20, you can help your team start to slow down, listen to each other, and work together.

For this game, tell your team that they need to count to 20. However, they are not allowed to say more than one number in a row and they can't go in a predetermined order. It has to be random and one-at-a-time. If more than one person says the same number at the same time, everyone has to start over at one. The goal is to get to 20 without this happening.

Ask if your team has any clarifying questions. This is always a good habit to get into for a couple of reasons. First, it lowers your status by showing that you aren't always perfect. You are owning up to the idea that you may not have explained the activity perfectly. In short, it humanizes you. Second, it puts the onus of understanding the rules on your team and helps you ensure that they do, in fact, know what's expected of them.

Then, simply tell them to start counting. Usually, teams mess up right away. Just let them fail, going back to one over and over.

After some struggling, you can coach your team to slow down, breathe, and take their time. Make sure to ask lots of questions about what is and isn't working. Each group is different, so this self-reflecting is important for your team to explore how they work best together to reach their goals.

I'm a big fan of what I call the Yay Game, and it's definitely possible to play it remotely.

This activity starts with one person volunteering the first line of an adventure. For example, "We are going to the moon." Let your team practice trusting their impulses and taking turns by not choosing who goes first. After the first line, everyone should raise their arms high and say, "Yay!" Then, someone else adds the next line of the adventure. It should also start with "We are..." and make sense with the first line. Going back to our moon example, the next person could say, "We are taking a rocket ship."

People shouldn't try to be funny or contrarian. They should just try to say something enjoyable that keeps the adventure going.

Word at a Time Story is just what it sounds like. Have your team tell a story that makes sense by only saying one word per person at a time.

For remote play, I would choose an order for your team, so that each person knows exactly when their turn will be each time. Again, explain how the goal is to work together and not to be creative or funny. It just needs to make sense.

As your team gets going, you may notice that some people are overthinking or taking a long time before each turn. You can coach them to try to trust their instincts and their teammates and pick up the pace.

For the Ad Game, you can act as the moderator leading the activity. Tell your team that they are a make-pretend creative agency that needs to develop a product and promotion plan for an invention that does not really exist.

Take turns calling on each of your teammates to ask them questions such as:

Before starting, make sure to explain that riffing off each other's ideas is the aim of the game. Everyone should agree with each other's contributions and add more details instead of rejecting ideas and going in another direction.

Here's a listing game. Tell your team that you will provide a category for each person. When that person has their category, they will have to quickly name seven things in that category. Then, the person who just went chooses someone else and gives them a new category. As people list their seven things, everyone else can hold up fingers correlating with how many things have been named. When they get to seven, everyone can say, "Seven things!" before you call on the next person.

Some possible category ideas are:

Make sure to explain that each person should do their best to name seven things that make sense in that category. However, speed is important. If someone can't think of something, they can just make something up. Again, the goal isn't to be silly or funny. You're just trying to name seven things in a category as quickly as possible.

Remote Monologue Hotspot will require your team to have some hand signals to make things run more smoothly. Call on one person. That person is in the "hotspot." Then, give them a topic. Some examples are apples, house, bear, or running.

The person in the hotspot then has to start telling a truthful story based on the suggestion. They have to keep talking until someone gives the signal that indicates they want to take a turn. People should give the signal when the hotspot person says something that makes them think of some other truthful story.

For example, if someone is telling a story about the first time they made apple pie, someone might give the signal when they hear the hotspot person talking about peeling the apples. Peeling might make them think of a story about how they got a bad sunburn and their skin peeled.

To make this game run more smoothly, make sure your teammates know how important it is to support each other. That means they shouldn't leave people in the hotspot too long. Everyone should take turns and share the air.

When the day comes that we can mix and mingle in larger groups in-person, here are a few quick team building ideas for face-to-face meetings.

Machine is a timeless theater game. Have your team stand in a circle. One person will go to the center of the circle and start a repetitive sound and movement. Then, the rest of the team takes turns entering the circle and doing sounds and movements that "go with" whatever's already going on in the circle.

Ideally, everyone should be focused on one spot and their movement and sound should repeat and stay consistent. You can play around with trying to alter the tempo of the machine and ask your team what they thought the machine was when you debrief and reflect.

Again, everyone should stand in a circle. Two people who are standing next to each other should turn toward each other and clap their hands at the same time. Then, one of those people turns and claps with the next person in the circle, and the clap goes around the circle from there.

You can complicate this activity by allowing people to switch directions or skip people with a "Whoosh." This game forces people to pay close attention and work together to keep the clap moving around the circle.

Finally, this activity starts similarly to The Clap. Two people in the circle face each other as the moderator counts down from three. After the countdown, the two people clap their hands together and simultaneously say a word.

This activity helps teammates work together and develop a kind of group mind, which is important for any team that has to collaborate to solve problems and get creative.

Let me help your team collaborate better. I have hundreds of games and activities that can help your team listen better, collaborate, and get more creative. I've been researching improvisation's benefits and applications for a decade and leading workshops that help teams work together and perform optimally.

If you need your team to come together even when they're apart, contact me so we can discuss solutions. I can facilitate remote workshops or coach leaders one-on-one to plan team building that will bring your team together and help them get the job done.